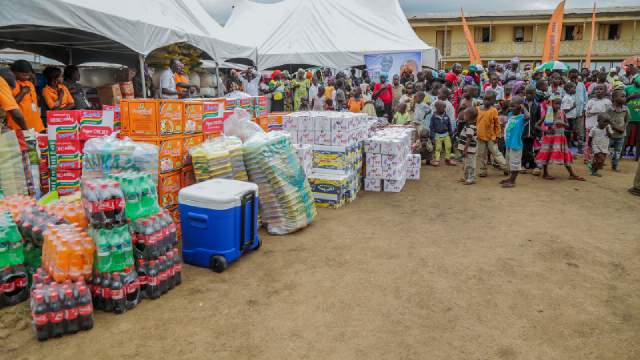 Widows from different religious groups and denominations within and outside Abuja have lamented the negative effect of the nation’s bad economy, saying that if not for the effort of few philanthropists, many of them would have not made it through.

They, however, commended the generosity of a few Nigerias, especially the Chairman of popular indigenous company, STANEL OIL, Stanley Uzochukwu for feeding and empowering over 1,000 of them both within and outside Abuja.

Commending the young billionaire and philanthropist, the president of Widows Association, ECWA Church, Tudu Wada plateau Chapter , Hanatu Danladi, described Stanley as a “great philanthropist” saying he has been putting smiles on the faces of helpless widows and orphans secretly from different religious groups and denominations since 2011.

“I am overwhelmed by the generosity of Stanley towards the less privileged particularly the widows and orphans. He is the reason why over 1,000 of us are surviving the current recession.

“Since 2011 STANEL OIL has been the source of basic needs for many widows. He visited us 3 to 4 times each year since 2011. He visited us 4 times in 2016 and it was awesome. Over 1,000 widows went home smiling with a lot of goodies. Not just a visit but he usually come with trucks of different food items – bags of rice, maize, ground nut oil, wrappers, cartons of both washing and bathing soaps, cartons of tomatoes, matrasses, packets of maggi, bags of salt, bags of sugar and so on.

“He is not only flattering us with basic needs but also empowering us. He empowers widows from time to time by giving us Kerosene tanks free of charge and supply us kerosene on credit to sell at retail prices and return the capital to him while we enjoy the interest. He is not only giving us fish to eat but also teaching us how to fish. Is that not amazing?

“Stanley is indeed a worthy son to us and as such, we pray for him daily as we ought for our biological son. For our sake, God will not let him down because he is doing His will for orphans and widows. Other rich people should follow his style and they will be blessed.”

Mrs Danladi called on fortunate youths to emulate Stanley and extend their alms to the less privileged saying, “thousands of widows and orphans pray for him daily for God to protect and replenish the young man who is saving our lives from hunger and starvation”.
Similarly, one of the orphans, Idoko James, who is a beneficiary of the billionaire’s alms-giving to the poor, also spoke on behalf of hundreds of orphans whom Stanley in his benevolence had given hope and reason to smile particularly in this recession era.stanel4

According to James, “Stanley is ‘God sent’ to widows and orphans in this period of recession. He has been blessing our mothers secretly in numerous ways for the past 6 years. By empowering our mothers, they are able to send us to schools.stanel5

“In addition to feeding and empowering of our mothers, STANEL OIL also gave some of us scholarships which I am a beneficiary.”

It would be recalled that the Chairman, STANEL OIL, Stanley Uzochukwu on his birthday, July 30, 2016 in his compassion for the needy celebrated his birthday in two IDP camps – Stephanus Foundation, Bukuru and House of Recap British American Junction in Jos, the Plateau State capital. During the visit, trucks of food items, clothes, toiletries, mattresses, Keke Napeps, and undisclosed huge amount of money in cash were donated to alleviate the untold sufferings of the IDPs.

One thought on “Widows commend Stanley Uzochukwu over empowerment”