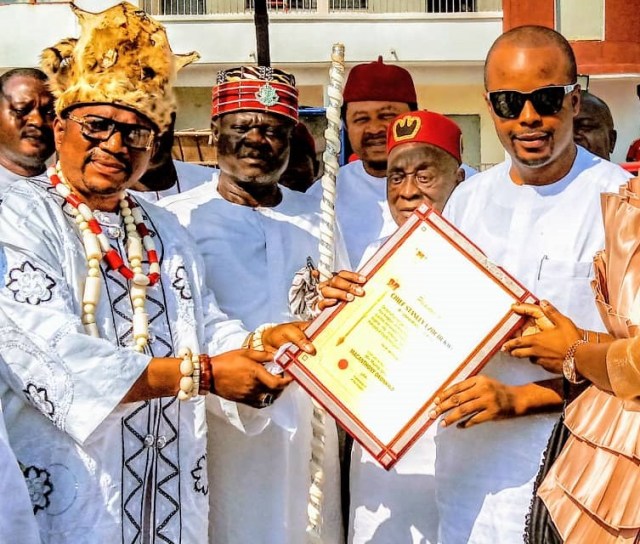 Ancient Kingdom of Alor in Anambra State has given a rare honour to a worthy young Philanthropist, Dr Stanley Uzochukwu in recognition of his contributions to the society and valuable service to humanity.
The traditional ruler of the Alor Kingdom, His Royal Highness, Igwe Macanthony Chinedu described the Stanel Boss as “a rare breed that has empowered thousands of ndi Anambra via employment, scholarship, loans and connections.

“The special honour is in recognition of Dr Stanley’s immense contributions to the society and valuable service to humanity. His home-coming investment in Awka has impacted many lives and therefore deserves this rare honour. We are very proud of you”.

Receiving the honour, Uzochukwu said, “I feel highly honoured and humbled by this honorary recognition in Alor Kingdom. It has stirred up my spirit to do even more for my people. Thank you very much”!
The young philanthropist is the Chairman/Chief Executive Officer (CEO) of Stanel World, a one-stop luxury brand in Awka which is a subsidiary of Stanel Group with branches in Jos, Plateau State and Suleja in Niger State.
Ancient Kingdom of Alor in Anambra honors Dr. Stanley Uzochukwu